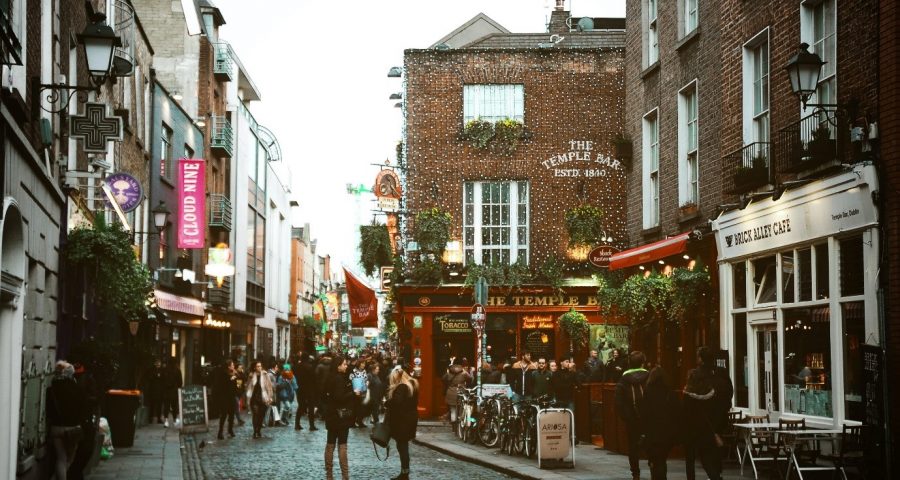 It’s actually been quite a while since I headed off to Dublin for a long weekend and I’ve been saving this one for a rainy day… And today is a very rainy day in Manchester! With super cheap flights, you could say it was a pretty spontaneous (albeit booked well in advance due to super cheap flights) trip. I had never been to Ireland before and since it’s my heritage, I felt I was letting the team down. No need to pack my new Oliver Peoples sunglasses for this one, sob, but hey, a holiday is a holiday, right?

We stayed in Temple Bar in an Air BNB that overlooked the River Liffey, and it was literally the most central location ever. What I liked about Dublin was the ability to walk across the whole city without taking the entire day. I mean yeah, I’m not going to lie it took a long while, but it wasn’t half as big as London (which is a good thing…).

One thing I will say about Dublin is it’s not an easy place to eat. We walked for hours and hours sometimes looking for somewhere we fancied because there’s a lot of the same thing, but some of the places we did land in were INSANE. Take Bunsen Burger for example – this place literally had people queuing out the door for their delicious burgers and we were just some of those people.

I actually just love the little things in life. I’m not a fancy gal and I’d take a greasy burger over a Michelin star restaurant any day (seriously – mostly cos I’m dead fussy…) and this was probably one of the best burgers I ever had (sorry, Almost Famous!). Whack on a side of shoestring fries and you literally stole my heart… But yeah, Bunsen is the ONE.

Ok, so we should probably change this guide to ‘where Laura ate and drank’ because that is pretty much what I live for – but more specifically, I live for donuts. Anyone I know will tell you how crazy I am over donuts. I’m probably going to have a donut tower as a wedding cake one day when I finally find my fellow donut lover (we’ll probs meet in Krispy Kreme, it’d be a love story worthy of a novel)… I digress… So of course before I went it become habitual that I’d look into where the best places to eat and drink were, and this little place called The Rolling Donut just kept popping up everywhere so I knew it was the place for me. When we arrived, we could see the amazing creations through the window – seriously, Krispy Kreme have NOTHING on this place. The image above is a red velvet donut and there were so many incredible options to choose from. I definitely went a good couple of times and basically did the donut tour of Dublin, and this was by far the best place. See, I did the hard work for you – maybe I could get a job doing that? No… Ok…

While it was only temporary, we did manage to stumble upon a Peroni pop-up which was a converted car park-come-cocktail bar where they were mixing up Peroni based cocktails and serving what looked like the best pizzas ever (which I unfortunately didn’t eat). The vibes were actually all I needed and more and I definitely could have stayed there all night if I wasn’t on a massive mission to shop until I dropped.

Next on the list of places Piggy Laura ate next was another place we stumbled upon accidentally. We were initially looking for pizza (which we actually couldn’t find ANYWHERE) when we found Rustic Stone. Forgive us for the confusion, but the name just spoke ‘pizza’ to us, and we strolled on in. Little did we know it was actually a very posh restaurant created by a chef named Dylan McGrath. Again, I was a bit picky here (and they unfortunately couldn’t really cater for allergies or intolerances with anything alternative – FYI) and it took me ages to decide what I was going to eat and I was fully expecting to be disappointed, but the hungrier I got waiting, the more hyped I got about my food arriving. My food eventually arrived, and I took the first, highly anticipated bite of my burger. I can honestly say it is probably the best burger I have ever eaten. You know when someone just has that herbs and spices ratio completely down? Yeah, that. Even the chips were godly. Definitely worth the dollar. I didn’t even have dessert after…

Last, it wouldn’t have been a trip to Ireland without having a proper brekky at a proper cafe. Unfortunately I don’t remember the name of the Irish breakfast cafe but I can tell you it was delish. Seriously, greasy fry up over fancy pancakes ANY DAY of the week! We also tried to go to Balfe’s for an actual fancy breakfast but we were too late, so I settled for sweet potato soup and some of this fancy break which was a bit of alright – but I would probably recommend getting out of bed sooner so you don’t miss the breakfast since that’s what people tend to go there for.